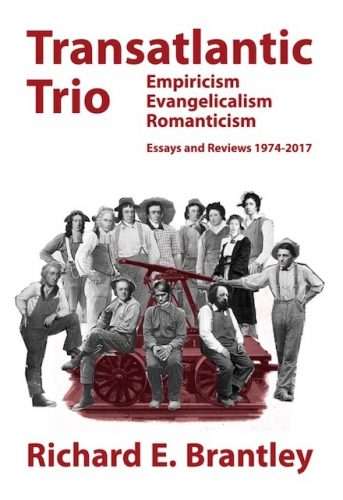 About the Book (from the Prologue)

Francis Jeffrey’s indictment of William Wordsworth’s The Excursion (1814) as “mystical verbiage of the Methodist pulpit”—“This will never do!”—will itself never do (Jeffrey 463, 465). Charles Lamb’s praise of The Excursion as “natural methodism” provides a fuller, more positive clue to the historical, interdisciplinary resonance of Romanticism (Lamb 2:149). Lamb’s two-word mouthful offers versatile insight, bears interpretive weight. This phrase signals how the rival traditions of empiricism and evangelicalism come together to embroider not just Wordsworth’s art, but Romantic literature throughout the English-speaking world. A lower-case but not entirely secularized swerve to evangelicalism spins volumes about how 19th-century poetic faith willingly suspends disbelief: the free-wheeling swing of Romantic-era creativity proclaims interconnection.

The combination of “natural” and “methodism” opens a critic’s pathway. British empiricism and transatlantic revivalism strike sparks off the literary imagination of a bi-national Romantic Movement. On United Kingdom/United States shores, faith in experience and experiential Faith rise inexorably to converge at the crossroads of an inspired transatlantic artistry, a prime location—and locator—of creative authority. Lamb’s label pinpoints a cache of Anglo-American Romantic power. This natural methodism counts as a bi-nationally indigenous, religious as well as philosophical equivalent to M. H. Abrams’s magisterially philosophical emphasis on how Continental European Natural Supernaturalism applies to British Romanticism (Abrams, 1971). This arc from the late 17th to the middle 19th century encompasses John Locke (1632-1704), John Wesley (1703-91), Jonathan Edwards (1703-58), and the method of Anglo-American Romanticism. This one curve of that great timeline gives meaning perhaps even to such a spontaneous overflow recollected in tranquility as the signature middle-century question asked by Emily Dickinson (1830-86) as late as 1862: “Dare you see a Soul at the White Heat?” (Poem 365, 1). For the remainder of this segment to draw out the implication of Jeffrey’s negative assessment and Lamb’s favorable judgment of Wordsworth’s poetry is to announce that wielding natural methodism along that arc from high-to-late Romanticism of the Anglo-American world is the procedure and the concept of this essay.

The essays and reviews in Transatlantic Trio are laid out in a sequence that, though differing slightly from the chronological order in which they were first printed, best reveals the scholarly narrative implicit throughout these formerly scattered, yet now assembled, shorter pieces. One case—namely, “Locke and Wesley: An Essence of Influence”—compresses the collection’s take not just on the British, but on the British-to-Anglo-American, milieu. At least one essay in the first series, accordingly, may be short enough for readers in a hurry. Two cases, as already specified in the bibliographical listings, re-publish only the longer of two pieces otherwise similar. Another case revises the piece in question, and changes its title from “Romanticism and Christianity” to “Empiricism and Evangelicalism: A Combination of Romanticism”: this revision offers readers the quickest way to acquaint themselves with the series as a whole (books included). Establishing the broadest parameters of all the essays, a final case expands the piece and changes its title from “The Common Ground of Wesley and Edwards” to “Wesley and Edwards: An Anglo-American Nexus.” All other reprints remain as they were, except for occasional clarifications and typographical corrections (for convenience in transcribing, the somewhat differing styles of citation favored among the various original publishers are retained). May readers discover only the forgivable extent of remaining infelicity!

A familiar quotation from Gertrude Stein—“A real failure does not need an excuse. It is an end in itself”—justifies preserving, warts and all, how one historical, interdisciplinary critic proceeded: one argument at a time. The record of first thoughts may be worth consolidating, if only in order to honor, from the standpoint of tranquility, spontaneous overflow, and if only to register junctures at which others began to listen. The pieces now in this gathering can henceforth have their say together, and perhaps can even resonate, as a thirty-eight-member group, with Harold Bloom’s settled conviction. “All strong works of literature,” including les bonnes-lettres, can yet “give us,” Bloom concludes at age eighty-four, “the blessing of more life, whether or not they initiate a time beyond boundaries” (Bloom, 2015, 7). This spirit has infused the collection and the books alike. May the collection create interest in the books, and vice versa!

The dialogue written with Diana R. Brantley does not bear on the root of empiricism, the branch of evangelicalism, or the blossom of Romanticism. The essay is included, though, in the interests of completeness, and because its form embodies the conversational spirit of the series as a whole. “Sleeping with the Enemy” can indicate, indeed, the stylistic standards by which the books here under review are appreciated. Those eighteen volumes all pertain to this cumulative, ongoing project in bi-national cultural poetics.

Browsers among these essays and reviews may wish to consider whether or not British empiricism and the empirical evangelicalism of the Anglo-American world can each in its own right prove as worthy to be read for its manner as for its thoughts. Readers might also stay alert to how the confluence of empirical philosophy and evangelical faith in the neoclassic-to-Romantic imagination helps explain 19th-century authors as aficionados of the realistic and of the preternatural at one and the same time. From their varying but corresponding points of view, these thirty-eight reissues do not just examine, but dwell in the possibility of, intellectual, emotional, and imaginative re-integration. Please take to heart, again—before perusing the first essay—all three  epigraphs, thereby bringing the prologue full circle. The Shelley stanza gives an important, surprising directive for anyone’s natural-cum-spiritual experience. The Koestler statement provides a succinct, stimulating watchword for aesthetic endeavor. And the Wiman meditation bears on how a life’s work ranges from the professional to the personal.

Richard E. Brantley is Alumni Professor of English, Emeritus, at the University of Florida, where, from 1969 to 2011, he taught courses in Romanticism, the History of Criticism, and the Bible as Literature. He hibernates in Gainesville, Florida, and rusticates in Zirconia, North Carolina. He gladly teaches, and gladly learns from, his fellow retirees. He still explores the realistic, yet hopeful, give-and-take between science and religion during the long Romantic Movement from roughly 1770 to 1870. Transatlantic Trio shows him warming to his subject at every crucial stage of its development.

Preview the Book (with Reviews by Scholars) 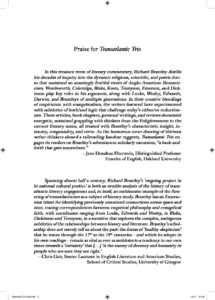 Alternatively you can buy the book through Amazon or other online retailers (see links below):

In this treasure trove of literary commentary, Richard Brantley distills his decades of inquiry into the dynamic religious, scientific, and poetic forces that sustained an amazingly fruitful strain of Anglo-American Romanticism. Wordsworth, Coleridge, Blake, Keats, Tennyson, Emerson, and Dickinson play key roles in his argument, along with Locke, Wesley, Edwards, Darwin, and Brantleys of multiple generations. In their creative blendings of empiricism with evangelicalism, the writers featured here experimented with subtleties of both/and logic that challenge today’s either/or reductionism. These articles, book chapters, personal writings, and reviews document energetic, sustained grappling with thinkers from the Enlightenment to the current literary scene, all treated with Brantley’s characteristic insight, intensity, congeniality, and verve. As the humorous cover drawing of thirteen writer-thinkers aboard a railroading handcar suggests, Transatlantic Trio engages its readers on Brantley’s adventurous scholarly excursion, “a back-and- forth that gets somewhere.”

These essays speak to the way Enlightenment, Romantic, and Victorian thinkers created a Venn diagram out of an opposition that still nibbles at the soul (to paraphrase Dickinson) of today’s postmodern world: science vs. religion. Of the many strategies the Romantics offer us to overcome the Manichean duality that runs rampant today are the flexibility of method over the rigidity of system as well as the multiple perspectives of “both/and logic” over the singular vision of “either/or logic.” In terms of literary criticism and history, these methods show us the benefits and necessity of moving beyond the single-nation formulations of Romanticism towards a comparative approach. By examining transatlantic influence and literatures as hierarchical, scholars of Transatlantic Romanticism have unwittingly embraced the very duality they are trying to deconstruct. Brantley’s methodology levels these fields to remove the competitive poetics and politics that emerged in the wake of the American Revolution and still maintains a foothold. His application of these strategies to present-day Western thought expands this book beyond a work of criticism to a philosophy that overrides the binary coding of a digital age. He ties “the transatlantic trio of empiricism, evangelicalism, and Romanticism together” in new and compelling ways: the collected essays and book reviews are tesserae that together form a mosaic, a more complete scholarly picture of Anglo-American Romanticism than previously existed. The book ends with a powerful autobiographical epilogue that testifies to the transcendent methods of Anglo-American Romanticism to help us make sense of not only the 18th-to-21st centuries, but also of our own lives, the antiphony of internal and external worlds that composes our thoughts and the “music of humanity.”